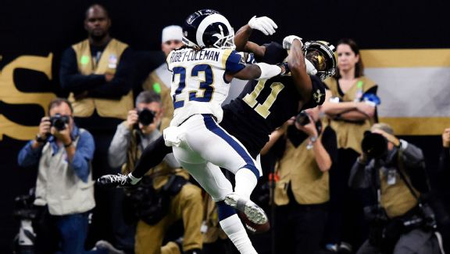 It was the non-call heard round the football world, from the French Quarter to Hollywood & Vine.

Los Angeles Rams defensive back Nickell Robey-Coleman hit New Orleans Saints receiver Tommylee Lewis early on a Drew Brees pass attempt with less than two minutes remaining and the NFC Championship Game tied at 20. A flag for pass interference not only would have given the Saints a first down, but they conceivably could have run the clock down and put up seven points.

As it was, New Orleans kicked a field goal with 1:41 remaining to take the lead. But the Rams got a field goal to tie, and then won with another 3-pointer in overtime.

Saints coach Sean Payton was outraged. So were his players, Saints fans, the city of New Orleans and the state of Louisiana. Lawsuits have been filed. Letters from government officials have been fired off to NFL commissioner Roger Goodell. ...