Pop some champagne for the Saints, who at least for now can call themselves the NFL's best (1 Viewer) 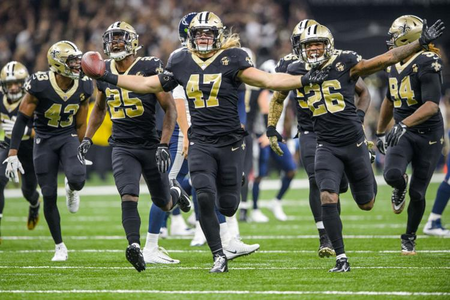 Alex Anzalone reached up into the highly excited, air-conditioned Mercedes-Benz Superdome air and pulled out a plum — a Jared Goff interception.

This old dome started rocking, literally rocking, from the frenzy of some 73,000 Saints worshipers losing their minds. It turned out to be a key moment in New Orleans’ eventual 45-35 victory over the previously unbeaten Los Angeles Rams.

Here in Subplot City this meeting of the Saints and Rams, old cold war-era combatants from way back in their NFC West days, is likely to continue to cause aftershocks to be felt all the way to the end of this 2018 season and beyond into the playoffs.

This one was, at least for now, the tiebreaker in playoff home-field advantage, a powerful espresso shot of “it ain’t bragging if you can back it up” swagger and the unofficial title of the NFL’s best team at midseason.

That’s what the previously unbeaten Rams were being called, anyway, 8-0 coming in but 8-1 winging their way back home to The Coast. Meanwhile, on the other coast, 1972 Miami Dolphins players will gather to pop champagne and toast the Saints on dusting off the last of this season’s NFL unbeatens. ...