Feb. 16, 2013 Late breaking news on the real reason why Pope Benedict XVI quit the job as Pope is centered around the fact that he was going to be charged for crimes against humanity by shielding pedophile priests in the RC church.

A statement given to Reuters reveals that the Church has decided to grant Joseph Ratzinger immunity against any and all charges involving his protection of known sex offenders.

As a high ranking member of the Catholic Church, Ratzinger knew priests who habitually were reported as sex offenders with children and shipped them to other parishes where they continued raping children.

Even after becoming a Pope as well he protected priests by denying criminal charges.

In a statement to the press today, the Vatican announced that:


It will give Joseph Ratzinger, formerly Pope Benedict XVI a permanent residency in the Vatican, which gives him legal immunity to any charges against him.
Click to expand...

Offline
Would not shock me at all.

Offline
The Catholic Church is a completely broken institution. I'd hope that whoever takes over decides to clean house and start holding people accountable, but I doubt whoever it is will. They'd rather hold on to their increasingly deteriorating status quo than do what needs to be done.

Please don't lump all religions, or even all Christians into one category.

Offline
I am not shocked at the allegations because it was obvious what they were doing and how could he not know about it. I am shocked that it came to this though and that they were going to actually have to press charges against the Pope instead of being able to strong arm him into turning them over. It is truly disgusting. All of the kids they turned there back on. What a huge blow to the Catholic Faith.


St.Fury said:
Please don't lump all religions, or even all Christians into one category.
Click to expand...

or even all Catholics. I am not myself but I went to Catholic schools and I know a ton of good people that are guided by its faith.

St.Fury said:
Please don't lump all religions, or even all Christians into one category.
Click to expand...

My point is this, everyone is free to be as spiritual as they want and believe in the deity they want, it's the human element of what runs different religions across the globe that causes stuff like this. It spans the history of humanity. I was raised Catholic and I quit as a teen b/c I couldn't stand the hypocrisy of organized religion, and I'm not saying Christianity, I'm saying ALL religions.

Offline
I'm interested to see how this all plays out given the **** storm that happened last year at Penn State. I could see Catholics letting it slide because people tend to do that with things they are deeply invested in. At the same time the non-religious love to hate on religion so who knows?

Offline
I don't think that's how they would handle it. The pope leaving is creates more attention and questions. I think they would double down and protect him.

seems he'll be "safe" as long as he doesn't leave the vatican or Italy:
Pope will have security, immunity by remaining in the Vatican | Reuters
Click to expand...

"His continued presence in the Vatican is necessary, otherwise he might be defenseless. He wouldn't have his immunity, his prerogatives, his security, if he is anywhere else,"
Click to expand...

this is just more of the same. How can a new Pope do his job and the religion move forward or heal knowing that this particular skeleton is still living in the closet - literally 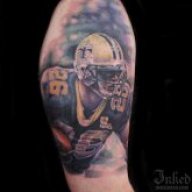 Offline
The Cardinals will be picking the new Pope before Easter I heard. Judging by their pick of QB's over the last few years, I'd say the church is in trouble.

Offline
Why haven't past Popes, cardinals, bishops, etc. been criminally charged like this?