Portland, Ore., city council passed a law Wednesday that will charge businesses a higher tax rate if their chief executive officer gets paid more than 100 times what the average worker at the company does.


Normally, businesses in the city pay a tax of 2.2 per cent of their net income to city hall. But the new law will slap a higher rate on any publicly traded companies in the city if their executive compensation is wildly out of line with what workers at the company earn.
Click to expand...


The tax will take effect next year, after the Securities and Exchange Commission begins to require public companies to calculate and disclose how their chief executives&#8217; compensation compares with their workers&#8217; median pay. The S.E.C. rule was required under the Dodd-Frank legislation enacted in 2010.
Portland&#8217;s executive-pay surcharge will be levied as a percentage of what a company owes on the city&#8217;s so-called business license tax, which has been in place since the 1970s. City officials estimated that the new tax would generate $2.5 million to $3.5 million a year for the city&#8217;s general fund, which pays for basic public services such as housing and police and firefighter salaries.
Click to expand...

It'll be interesting to see if this sticks, has any effect, or whether businesses try new ways to get around the disclosure rules to make it moot. Certainly a tax hit in one city isn't going to hurt the large companies involved like Wells Fargo, etc, but if it takes off and other cities pass similar laws it could become meaningful.
OP 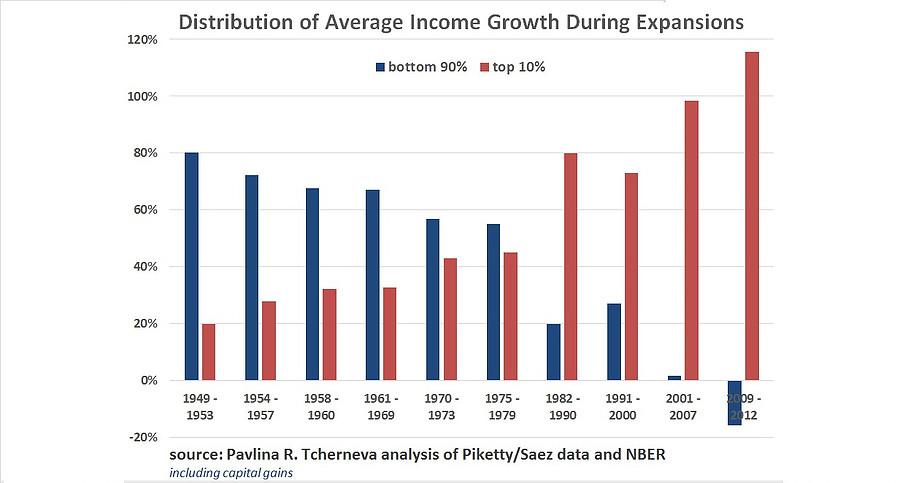 Offline
Is average the mean or median?

superchuck500 said:
Is average the mean or median?
Click to expand...

So, inflate the incomes of the executives or upper management and they're golden.

EDIT: I see later they said median. So, I guess it's the writer who doesn't understand the difference?

Media is a much better way to go..
OP

Offline
I would assume mean. I don't think I've ever seen median or mode expressed as average, though arithmetic mean is the same as average.

https://www.nytimes.com/2014/09/27/...reasingly-going-to-the-richest-americans.html has some different charts from the data.

If you need more detail, you could probably ask the original researcher on Twitter (https://twitter.com/ptcherneva) or figure out which journal it was published in on her site pavlina-tcherneva It's generically close enough to many similar graphs I've seen about the trend, so I'm not as apt to question it as some skeptical of the idea though.

Offline
I guess all of us should just read the article. Ha.

Moving to address income inequality on a local level, the City Council in Portland, Ore., voted on Wednesday to impose a surtax on companies whose chief executives earn more than 100 times the median pay of their rank-and-file workers.
Click to expand...

Offline
Ha, to me, the most interesting thing is their disclaimer in the comment section.

To encourage thoughtful and respectful conversations, first and last names will appear with each submission to CBC/Radio-Canada's online communities (except in children and youth-oriented communities). Pseudonyms will no longer be permitted.

By submitting a comment, you accept that CBC has the right to reproduce and publish that comment in whole or in part, in any manner CBC chooses. Please note that CBC does not endorse the opinions expressed in comments. Comments on this story are moderated according to our Submission Guidelines. Comments are welcome while open. We reserve the right to close comments at any time.
Click to expand...

Offline
The Portland idea intrigues me, because although it only addresses one area of income equality, it's the first time I've seen an attempt to tie it to the corporations doing the paying, and their own tax rate, rather than calling for increased income tax on the highest earners.
OP

superchuck500 said:
I guess all of us should just read the article. Ha.
Click to expand...

Oh, I thought you meant the graph, not the law. I muddled it by including the related yet not related graph. I just found it 5 minutes after reading about the Portland law and didn't want to dump two threads on such a similar idea. Mea culpa.

Offline
I'm also curious how CEO compensation is determined. It's not uncommon that published direct pay is not particularly outlandish. The true value of the compensation, however, includes stock/equity, and then really gets valuable when you start including carried options that become vested and owed when the relationship ends.

Fortune 500 companies often have "salaries" in the $2 million to $6 million range. But underneath all of that is total annual value of well north of $25 million - even three or four times that in some instances.

I also think it's a good way to keep high-value companies out of your tax jurisdiction. I get the idea but I don't think it's a problem with a statutory solution.
OP

Offline
From a link in the NYT quote, they're using the new SEC reporting rule that just kicked in (Edit: will kick in on January 1, 2017):

The Securities and Exchange Commission today adopted a final rule that requires a public company to disclose the ratio of the compensation of its chief executive officer (CEO) to the median compensation of its employees. The new rule, mandated by the Dodd-Frank Wall Street Reform and Consumer Protection Act, provides companies with flexibility in calculating this pay ratio, and helps inform shareholders when voting on &#8220;say on pay.&#8221;
&#8220;The Commission adopted a carefully calibrated pay ratio disclosure rule that carries out a statutory mandate,&#8221; said SEC Chair Mary Jo White. &#8220;The rule provides companies with substantial flexibility in determining the pay ratio, while remaining true to the statutory requirements.&#8221;
The new rule will provide shareholders with information they can use to evaluate a CEO&#8217;s compensation, and will require disclosure of the pay ratio in registration statements, proxy and information statements, and annual reports that call for executive compensation disclosure. Companies will be required to provide disclosure of their pay ratios for their first fiscal year beginning on or after Jan. 1, 2017.
Click to expand...

Incidentally, this is why the law is based on median, because the disclosure rule requires the full disclosures to be based around median.

superchuck500 said:
I'm also curious how CEO compensation is determined. It's not uncommon that published direct pay is not particularly outlandish. The true value of the compensation, however, includes stock/equity, and then really gets valuable when you start including carried options that become vested and owed when the relationship ends.

Fortune 500 companies often have "salaries" in the $2 million to $6 million range. But underneath all of that is total annual value of well north of $25 million - even three or four times that in some instances.

I also think it's a good way to keep high-value companies out of your tax jurisdiction. I get the idea but I don't think it's a problem with a statutory solution.
Click to expand...

Larry Elision comes to mind as an extreme example of this behavior. 1 dollar in salary, but 70 million in total compensation. A lot of this behavior could be eliminated by abolishing the capital gains rate.
Show hidden low quality content