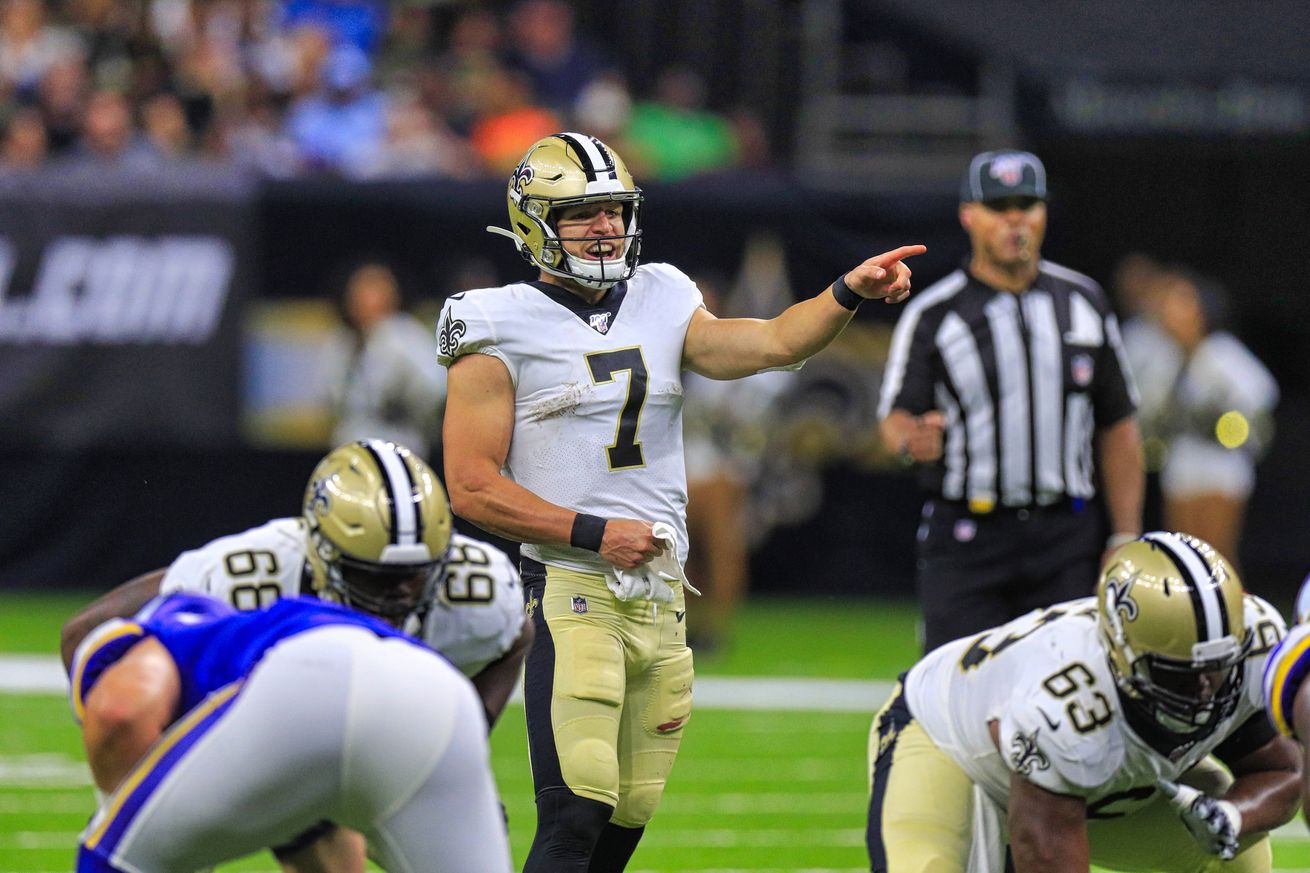 Photo by Stephen Lew
Which position battles caught your attention in the Saints preseason opener?

One preseason game is in the books for the New Orleans Saints. After Friday night's loss to the Minnesota Vikings, training camp nears it's halfway point and three preseason games remain to shape the team's opening day roster. Many position battles are far from decided. Some players have taken early control of their own destiny, while other roster spots have gotten even more murky. Here are how some of the more talked about roster battles are beginning to take shape. 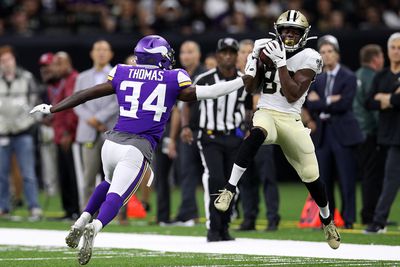 The group itself became slightly thinner on Saturday, when the Saints announced that Rishard Matthews was released with a "left team" designation. The battle itself though, for what figures to be for 1-2 spots, appears to be much closer than originally thought. Cyril Grayson caught 2 passes for 32 yards against the Vikings, including a beautiful back shoulder grab along the sideline showing good hands along with excellent body control and footwork. He also showcased his blazing speed on an end around that was nullified by penalty and on two kickoff returns, where he averaged 30.5 yards per touch. Deonte Harris didn't catch any passes, but electrified the Superdome crowd with his own speed and elusiveness on three kickoff returns that averaged 30 yards per attempt. Both Grayson and Harris hope to cement their spot not only by standing out at receiver, but also by winning the return job over cornerback Marcus Sherels. Lil'Jordan Humphrey made a statement after a quiet camp so far by leading the team with 42 receiving yards on two catches Friday night. One showing impressive strength and elusiveness to convert a 3rd and 9 into a first down, and the other turning a short pass on a crisp route into a touchdown highlighting good after the catch ability. Simmie Cobbs had just one catch, but got himself free from coverage on a number of occasions and continues to impress coaches in practice. The real camp darling thus far, Emmanuel Butler, missed Friday's game with a minor injury but returned to practice over the weekend. Butler continues to dazzle practice onlookers with his sharp routes and ability to make the catch in tight coverage. Even if Grayson or Harris were to win the return job, likely causing the team to keep six receivers, those two along with Butler, Cobbs, and Humphrey are fighting for just two spots. All have likely surpassed Austin Carr and Travin Dural, at least for now, but Ted Ginn Jr., Keith Kirkwood, and Tre'Quan Smith most likely have their spots secure behind Michael Thomas. Dwayne Washington was singled out by coach Sean Payton earlier in camp for his strong practice performances, and rewarded with the bulk of the snaps against Minnesota. Washington finished the game with 36 yards on 8 carries, and continues to hit the line of scrimmage with authority. Veteran Jacquizz Rodgers saw quite a bit of action as well, but was mostly ineffective. Undrafted rookie Devine Ozigbo continues to make the most out of limited touches. Ozigbo has good explosiveness into the hole, and shows a nice burst in the open field. Washington seems to have the clear edge for the number three job behind Alvin Kamara and Latavius Murray, but will have to remain sharp to hold off Ozigbo. 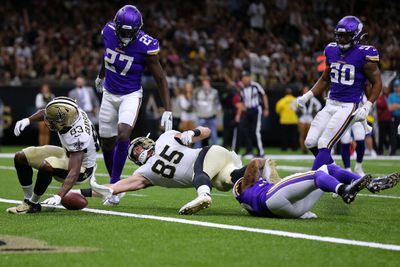 Seventh round pick Alize Mack missed Friday's game with an injury, Jared Cook's top spot on the depth chart is obviously secure, and Josh Hill's role as a blocker seems safe. Dan Arnold continues to be wildly inconsistent as a receiver, and is already limited in his role due to limited blocking ability. Arnold did score a touchdown, showing impressive effort and strength near the goal line. He also bobbled an easy reception that resulted in an interception return for a touchdown, and continues to seem unsure of himself in the open field. Veteran pickup A.J. Derby caught 2 passes for 13 yards, but is a more versatile blocker than Arnold, though not the down field threat. The tight end spot is undeniably better with the acquisition of Cook, but neither Arnold, Derby, or Mack has thus far yet inspired confidence in the depth at this position Rookie 2nd round pick Erik McCoy seems all but assured of the starting center job at this point, although veteran C/G Nick Easton played well and seems to be the top backup option inside. Will Clapp and Cameron Tom each had solid outings against Minnesota, but may be competing for just one remaining backup spot on the interior. The Saints tackles were extremely inconsistent against Minnesota, as concerns continue about the depth behind Pro Bowl caliber starters Ryan Ramczyk and Terron Armstead. Michael Ola seems to still be the top backup option outside, particularly after veteran Ulrick John was placed on injured reserve, but look for New Orleans to take a look at other options as preseason progresses. 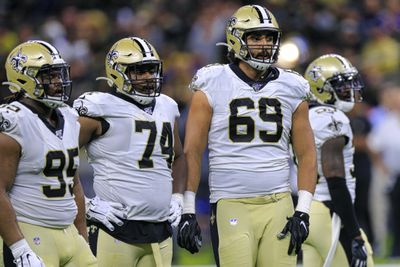 Trey Hendrickson and Mario Edwards Jr. both played well against the Vikings, but the front line was unable to generate consistent pressure, and often failed to hold up at the point of attack as a group against the run. The starters are set, with Cameron Jordan and Marcus Davenport outside, along with Malcom Brown and David Onyemata inside until the return from injury of Sheldon Rankins. The depth must be able to establish itself as the regular season draws closer for this defense to be most effective. Tackles Sylvester Williams, Taylor Stallworth, or rookies Shy Tuttle and Corbin Kaufusi must win the line of scrimmage in their upcoming games to win jobs inside. Undrafted rookie end Porter Gustin was active during the game and had some good moments, but must prove that he can rush the passer and establish the edge more effectively if he is to earn snaps away from Edwards or Hendrickson. 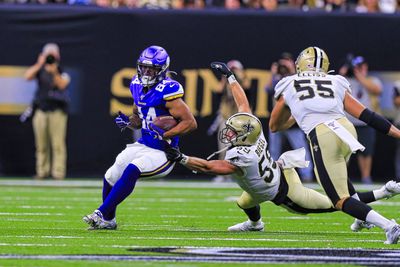 Rookie 7th round pick Kaden Elliss saw quite a few snaps Friday night, as did third year pros Darnell Sankey and Vince Biegel. All three had good moments, and Sankey in particular looks like he's quickly playing his way into a roster spot. The linebackers were also responsible for poor containment on several plays against the Vikings that led to big gains. The unit as a whole should quickly shore up those issues, and starters Demario Davis and Alex Anzalone are expected to have big seasons. Top reserve Craig Robertson was all over the field against Minnesota, and Biegel, Elliss, and Sankey are expected to push each other hard through the rest of camp. 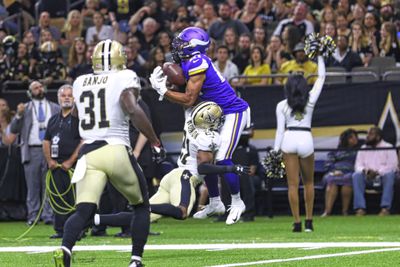 The Saints secondary, like their linebackers, were responsible for poor containment on a few different plays. Patrick Robinson and P.J. Williams both struggled in outside coverage, although they each looked better in slot responsibilities, where their primary roles will be. Cornerback Kayvon Webster was flagged for a pass interference on an otherwise solid night of coverage, and may have moved past the still struggling Ken Crawley in the battle for backup corner. Safety J.T. Gray had a solid outing, and looks to surpass Chris Banjo in what is probably the final safety slot up for grabs. The team's secondary, which played poorly to open last season, must show that they can force turnovers and limit big plays for this defense to move to the next level. Rookies Chauncey Gardner-Johnson and Saquan Hampton, who have both played extremely well in practices, should continue to see alot of action through the rest of the preseason. 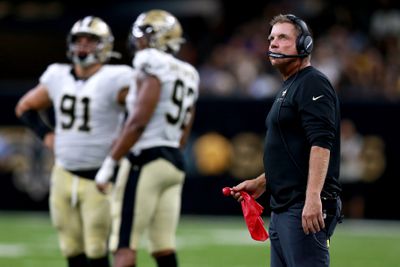 The Saints next game will be Saturday evening against the Los Angeles Chargers. Most of the players from the top units will see more game reps as the preseason progresses, meaning less game reps for some players fighting for a job. The team's starting units, and many of the top depth spots, are mostly set. There are still some important jobs up for grabs though, and now with more limited opportunities for some players to make an impression.