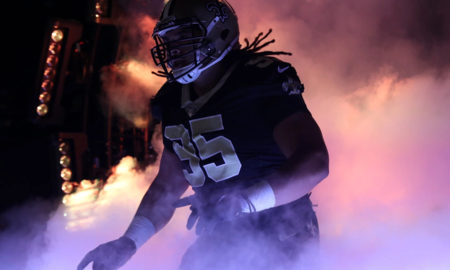 The NFL’s 2019 free agency period is rapidly approaching the New Orleans Saints, and they’re going to have a number of tough negotiations to work through. Several of the Saints’ in-house free agents should return on veteran’s minimum contracts, but most of them will require bigger deals to remain in New Orleans: guys like Teddy Bridgewater, Mark Ingram, and the other players on this list. Here’s our take for what’s in store for each player, compared to what their peers have received from other teams.
QB Teddy Bridgewater: $22 million per year

Bridgewater’s contract voids early in March, and he’ll have the opportunity to negotiate with teams ahead of schedule. It’s tough to pin down his contract value, but the voided years in his Saints deal come out to about $22 million per year. That would clock in between Joe Flacco and Russell Wilson as the eleventh-highest paid salary. Look for Kirk Cousins’ three year, fully-guaranteed contract to become standard among starting quarterbacks like Bridgewater.
CB P.J. Williams: $5.25 million per year

Williams could have been due a big payday but he has a driving-while-influenced charge hanging over his head. Slot defenders like him are paid like starters in today’s NFL, and if he’s cleared of charges it wouldn’t be shocking to see him draw a contract worth about $5 million per year. But if that stigma sticks with him, he may have to play at the veteran’s minimum. We’ll set his ceiling at three years, $16 million with $8 million guaranteed — a little less than what Nickell Robey-Coleman got. ...