Rabalais: What to get Drew Brees for The Big 4-0? He wants what Saints fans want, I'm sure (1 Viewer) 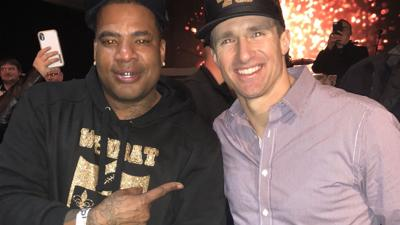 Drew Brees is 40 on Tuesday. He is no longer, to borrow a riff from George Carlin’s classic take on age milestones (“I’m four and a half! You’re never thirty-six and a half.”) pushing 40. The only push he may want or need now is a push from behind at the goal line in Sunday’s NFC championship game.

One day he may need a push out of the recliner, but that’ll come much later. He’s in pretty good shape for his age, you know.

What do you get the man who literally has everything for The Big 4-0? A gift card to Walk-On’s? He’s already a part owner. Cash? He signed a new $50 million deal with the Saints last year, so I think he’s flush.

You could try to pull a few strings and get him, his beautiful wife, Brittany, and their four adorable children a gig in a commercial for the Transformers movie “Bumblebee.” Oh, they did that just before the holidays? So it was a self-gifted Christmas AND early birthday present?

Come on, Drew. This is hard enough already. ...