Offline
What round is this guy projected to go? I have heard a little on him here and understand that he was great at Miami until he has some off the field issues and was kick off campus. He is a huge safety and seems to have a lot of upside if he gets his act together. Would you be upset if we picked him up?

Offline
I'd be ok with drafting him in the later rds. 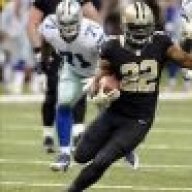 Offline
Didn't he return to Miami for another season?

Offline
If our new DB's coach Mcgriff who coached him for 2 years at Miami has anything to do with it I think we'd certainly be giving him a long hard look!

Offline
Been high on him for awhile, hope we get him late and eventually start IAQ at FS and ray ray at SS in a year or two, think he could have a kam chancellor impact like he did for the Seahawks

Offline
McGriff did coach him and recruit him while at Miami. 2 other guys that I would like us to take a look at would be Cooper Taylor of Richmond and Dexter McCoil of Tulsa. Those two along with Armstrong are 3 very big, athletic safety prospects. Roman Harper is a great box safety, but he lacks the athleticism to cover the league's new era of tight end. We need a bigger, more athletic SS.