Ready to get loud, Saints fans? Here's the secret to an effective -- and safe -- Who Dat chant (1 Viewer) 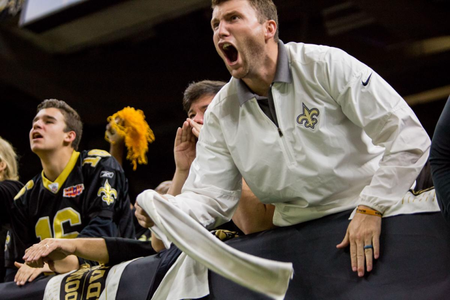 BY SARA PAGONES | The Advocate

Saints fans who made a din fearful enough to force the Eagles into burned timeouts and false starts Sunday are rightfully getting their due for helping the team to the critical win, but with even more on the line this Sunday, what's a hoarse Who Dat to do?

According to voice experts, the rules are pretty simple: Breathe deep — through the nose is best — before letting loose with an offense-rattling roar. And stay well hydrated — by drinking more water, not more beer.

Alcohol is a diuretic, vocal coach Kristin Samuelson of New York points out. That doesn't mean fans can't enjoy a cold one, but she and others advise alternating a beer with a water.

"The vocal cords are teeny tiny little ligaments that are mostly made of water," according to St. Tammany Parish Hospital speech therapist Kathy Crain. When they've been repeatedly slammed together, they don't want to touch each other. "They're angry and overused," she said. ...