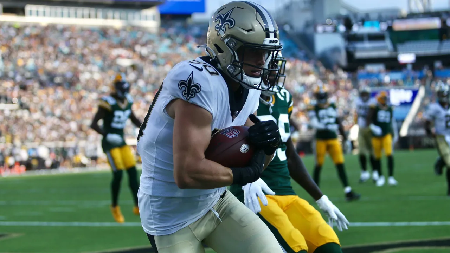 If we're doing memory-lane strolls, Chris Hogan has a pretty interesting one.

Before the New Orleans Saints receiver caught his 10-yard touchdown pass from Jameis Winston on the third quarter of the Saints' 38-3 victory over Green Bay in the season opener – giving New Orleans a three-touchdown lead – he'd last caught a pass in a regular-season game on Oct. 11, 2020, for the Jets against Arizona.

For his last touchdown in an NFL game, walk back a little more, to Dec. 16, 2018, for New England against Pittsburgh.

So Sunday's score was special for Hogan, who, after being waived from injured reserve by the Jets last December, joined the Premier Lacrosse League in February and played that sport until the PLL season ended. He signed with New Orleans on July 26, and caught one of five touchdown passes by the Saints in the season opener.

"It was pretty incredible," Hogan said of the touchdown. "It's been a little while since I've gotten in the end zone. It's been a few years.

"To be able to make a play in a game like that, first game of the season where we're trying to find our identity and build on the team that we have, I was pretty excited. I was very fortunate to be in that position and was thrilled to make a play for the team."