Reggie about to come up on NFLN (1 Viewer) 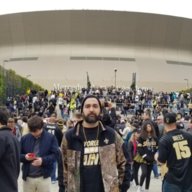 Offline
did i miss it....just turned it on
OP

La Canfora stating that he is not in line to get a ton of carries with Bell doing so well and Pierre coming back and that he is a situational player. Still explosive....blah blah blah.

IMO, the jury is not out on Reggie. Drew has games where we forget how bad of a game he played. I don't understand all of the harsh criticism. Reggie is a great player when he is in space. It seems like the defense keys in on him and does not allow him to ever be 1v1 in the open field with someone. This offense needs to find out what his role is and the best position for him to be in ALL while running over teams with the normal operation of our offense. I am confident that will happen.
Show hidden low quality content