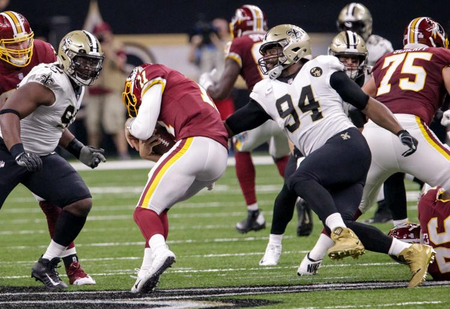 Saints defensive end Cameron Jordan says the NFL's recent "re-emphasis" of its roughing the passer the rule has been more invasive to defenders than the league officials said it would, according to a SB Nation report.

The rule change, which was billed as a "point of emphasis" instead of a major revision, prohibits tacklers from putting their full body weight on the quarterback, the report said. So far this season, roughing the passer penalties have risen by 72 percent, including offsetting penalties.

Jordan, along with nine other defensive lineman and linebackers interviewed for the report, said this has not only changed the way they play their positions, but it's also compromising their health and salary. He said he believes this year's change will become known as the "Aaron Rodgers rule," since Rodgers broke his collarbone after a hit from Vikings linebacker Anthony Barr last season.

"Why is it that we’re being penalized for something that we’re supposed to be doing?" Jordan asks in the report. "Hit the quarterback, but don't. Sack the quarterback and help your team out, but before he lands, put a pillow underneath his head, read him a bed time story — all after asking if you can invade his personal space." ...