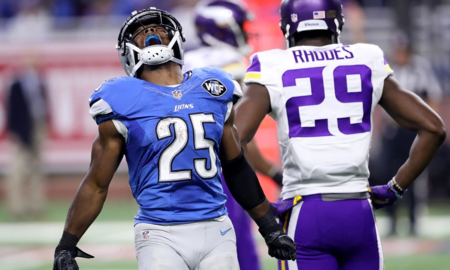 The New Orleans Saints are in the business of acquiring another running back, having already met with former Detroit Lions receiving specialist Theo Riddick and with free agent Alfred Morris flying in for his own visit. However, a report form Herbie Teope of the Advocate suggests Riddick isn’t in a rush to join a new squad.

Teope reported that Riddick’s visit with the Saints went very well, and that he may interview with another NFL team after meeting with the Denver Broncos on Monday. It was reported that the Minnesota Vikings have interest in signing their former opponent, but no meeting has yet been scheduled. But the veteran runner is considering all of his options before reaching a decision.

It makes sense to be patient. Riddick could score a big payday next offseason if he lands in the right situation and shines. On the other hand, signing with a team that won’t showcase his talents may reduce his future NFL prospects. There’s a lot to consider beyond who offers the most money in 2019....