Offline
Zion had flashes of dominance at times.

i wonder how jaxson feels about this?
*scratches chin innocently * 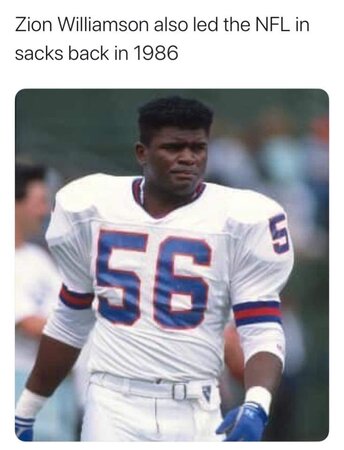 IIRC, we took George Rogers instead of L.T. That was as big of a "WHAT IF" as the Dolphins taking Culpepper instead of Brees.

ndcc said:
IIRC, we took George Rogers instead of L.T. That was as big of a "WHAT IF" as the Dolphins taking Culpepper instead of Brees.
Click to expand...

yes we did. We selected Rogers with our pick and Rickey Jackson with our 2nd second round pick obtained from the Chargers
from the Chuck Muncie trade.

We selected safety Russell Gary with our first second round pick. The Chicago Bears selected Mike Singletary a few picks later.
It probably wouldn't have ever happened even if we took LT #1,but the Saints could have had LT,Singletary,and Rickey Jackson
as the starting Lb'ers.
Show hidden low quality content

Similar threads
E’Twaun Moore: ‘Every game in Orlando will feel like a playoff game’
7 Pro Bowl Linebackers in a game (92 Saints Bills)
Catching up with Deuce McAllister the Saints, the coronavirus and his golf game
New game: Guess whose fault it is
Share:
Facebook Twitter Reddit Pinterest Tumblr WhatsApp Email Link