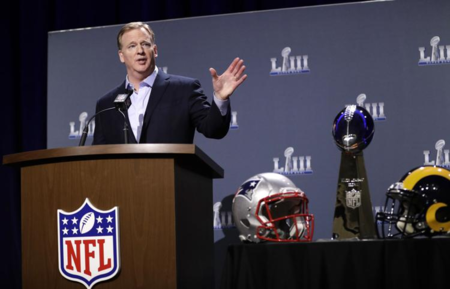 Roger Goodell didn't have much to say about the Saints' controversial loss to the Rams, but there was an issue with what some heard him utter Wednesday: It wasn't true.

Zach Strief, the longtime Saints offensive lineman and current radio broadcaster, called the NFL commissioner out as a liar after comments he made that seemed to indicate he'd talked to players and can "understand the frustration" after the game.

“The man literally stands up on a podium and just lies. It’s mind blowing," Strief said alongside Deuce McCallister in a spot on WWL Radio. "He is the commissioner of the biggest sports league in the country, and it is totally cool with all the people who employ him. All 32 owners. That he stands up on a podium and lies to everybody. They have no problem with it. How is that possible?”

The NFL clarified Thursday -- according to a report from ESPN's Mike Triplett -- that the comment was misinterpreted, and he was simply listing frustrated groups. They acknowledged Goodell had not spoken to players. ...