Rookie of the Year: Saints owner Gayle Benson is on verge of history in Year 1 (1 Viewer) 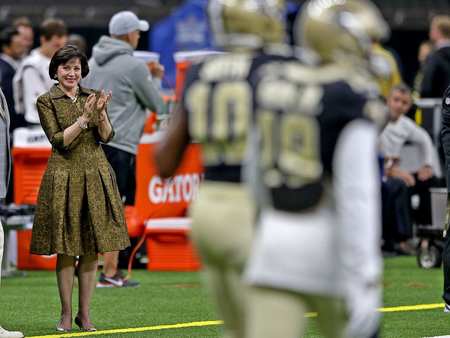 PARIS, Ky. -- Gayle Benson doesn’t feel the Saints buzz around New Orleans the way you and I do.

As the owner of the New Orleans Saints and Pelicans, her hectic schedule limits her personal time around town. An admitted homebody, she relies on friends and colleagues to give her the lay of the land and mood of the city.

And with the Saints on another Super Bowl run, it’s all sunshine and fleurs-de-lis in New Orleans these days.

“Everybody keeps telling me that it feels like 2009,” Benson said in the living room of the immaculately appointed main estate of the Benson family horse farm, 20 minutes north of Lexington, Kentucky. “I hope that another Super Bowl is in the cards. It would be a nice tribute to him.”

“Him” is her husband, Tom Benson, the longtime owner of the Saints and Pelicans. His death on March 15 left Gayle in control of an estimated $2.8 billion business empire, at the heart of which is the Saints, New Orleans’ beloved professional football team. ...