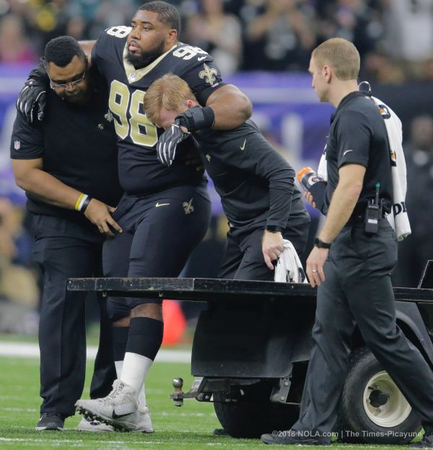 New Orleans Saints defensive tackle David Onyemata said he texted his teammate Sheldon Rankins after Sunday’s NFC Divisional playoff win against the Philadelphia Eagles to check on him and send him well wishes.

Rankins was carted off the field midway through the first quarter with an injury that was later confirmed to be a torn Achilles, and Onyemata said he felt for the Saints’ third-year tackle, who was in the midst of the best season of his career, posting eight sacks.

“Just watching the film and seeing how it happened, it’s pretty tough,” Onyemata said. “It wasn’t like anything out of the ordinary, and it just happened.”

Now Onyemata and the Saints will look to win an NFC Championship Game without Rankins in the lineup. While he doesn’t know what the coaching staff’s plans are to fill the void created with Rankins out, Onyemata plans to be ready for any possibility.

So this week he plans to get a little extra conditioning work in.

“If you go with a three-man rotation, you might have to do extra conditioning and just get your mind ready for more plays and expect more things,” he said....