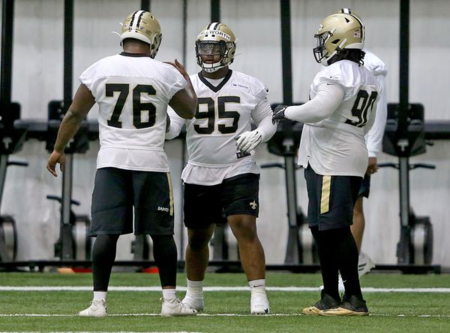 Don’t get it twisted, Taylor Stallworth is as big a fan of now former New Orleans Saints defensive tackle Tyler Davison as anybody, but that is not why he made the switch.

Yes, that is Davison’s old No. 95 jersey Stallworth is lugging around on the Saints practice fields, but it wasn’t his first choice when he made the switch from the No. 76 uniform he wore as an undrafted rookie out of South Carolina last season.

After a strong debut season as a rotational piece on the New Orleans defensive interior, Stallworth wanted to call back to those college days by switching to the number he wore with the Gamecocks. At least, that was the plan until Malcom Brown signed.

“What number is he going to get? Well, he had 90 with the Patriots,” Stallworth said. “Then they let Tyeler go to the Falcons. What number’s available now? I don’t want to get 95, Tyeler’s my dog.” ...