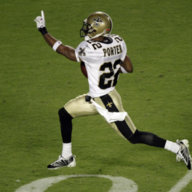 Offline
I remember watching. I was only 6, but I was jumping up and down cheering with my family when we scored on the very first kickoff. I thought we must have the best team ever! Anyway, many, many years later...and you know the rest of the story.

There was, of course, a big build up to the first season and lots of anticipation. Most of the kids on our street were big Colt fans because of Johnny Unitas. My friend and I were Colt fans too because that's who the big kids liked. But when the Saints were formed, we announced our change in allegiance and got pushed around in a good natured way until everyone got on board with the idea of having a new favorite team that was New Orleans' own.

Offline
Wow I'd like to watch the rest of whatever show this is from.

Offline
Man thats great, but if they only knew.

Offline
The Saints started well but farted and fell. John Gilliam returned the opening kickoff 94 yards for a touchdown and gave the Rams a good fight but ended losing by a score of 27 to 13.The thing most memorable to me about the games in Tulane stadium was that when the Saints made a good play everybody would stomp and cheer and the whole damn stadium would shake .They finished the first season with a 3 and 11 record but it was a hell of a lot of fun.
Show hidden low quality content