Online
There has been some discussion in various threads about our team's free agents at the end of this season, but I thought the topic should have its own thread.


Here's a list of those with one year left on their contract:

Who would you like to bring back or extend their contract beyond the remaining one year?

Nick Fairley should be re-signed, but I wonder if the comfort of a new contract may cause him to backslide into his former lazy ways. Willie Snead is a no-brainer. Lelito has proven to be a solid O lineman who is versatile and can back up several positions. I'd bring Mauti back as well. I like his high motor.

As to possible extensions, I would say Vacarro has earned one. Hopefully the PED violation was a one-time thing. Cooks should be extended as well. If Breaux is pursued, I hope he can stay healthy. I liked what I saw of him last year.

Offline
Drew Brees is an interesting one though. All the uncertainty regarding his contract will repeat itself this coming off season. He just had a great season. What does the team do now?
OP

Can you still carry over from one year to the next? 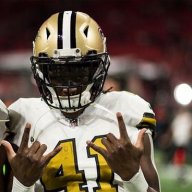 Offline
Ellerbe, Moore, Mauti, Webb, Coleman, Evans, and Kuhn should all be cheapish resigns. Those should happen IMO. Any others for depth. Fairley and Snead will be a little pricier but those two should get locked up too.
KV I expect to be extended soon and now actually would be a good time to extend Breaux with the injuries he has had this year could lower his price/leverage some. I also think they will pick up Brandin Cooks' 5th year option and try to extend him next offseason.

Offline
To be clear, Snead will be an exclusive rights free agent, so he's going nowhere. (Same for Coleman, if the Saints want him to return.)

Fairley is obviously the top priority. He's been a disruptive player, and outside of a few boneheaded moments, a solid teammate. He was on a prove it deal, and he proved it. I wouldn't overpay for him if someone absolutely raises the price on the open market, but of the 2016 FAs, he's the #1 re-sign IMHO.

After that, Ellerbe is the interesting one to me. He's been fairly disruptive when on the field. Of course, on the field is the key question. Again, I think you want him back, assuming no one goes deep into their pockets. Given his age and injuries, that's less likely than Fairley, so the Saints probably have a reasonable shot to keep him with minimal guarantees.

Sterling Moore has come in and done a serviceable job. He's not a #1 or even #2 CB, but he'd be a guy I'd have no problem with as a depth guy. And let's face it, he was on the couch when the season started, so he shouldn't break the bank either.

Edabali is an interesting one. I think he was expected to do more this year, but the staff -- right or wrong -- has gone with guys like Kruger, Tapp, and others more often than Edabali. He's a restricted free agent, so I'd at least tender him. But it wouldn't shock me if someone gave him some sort of 3 year, $12M type offer based on what they saw as potential before this year. Whether the Saints match probably depends on if Payton (and now Allen) prefer a veteran over him.

Drescher has been a fine long-snapper. Certainly no lapses there and he should be re-signed given his lack of attention (a good thing).

The rest of the list you can argue about in terms of depth. Guys like Lelito never quite developed as expected. If he's there and at a minimum salary, no one here will complain. But keeping him isn't a priority. Same with other guys on that list. Mauti is a solid ST guy and has had flashes when he filled in and even was in heavy rotation at times, but no one here's going to cry if he's gone I'm sure. That's not a knock on him, it's just a testament to the fact that if Mauti is a heavy rotation guy then the Saints still haven't put together a LB corps that can last and succeed.

Looking down the line 2017 is a more important decision. Kenny, Cooks, Brees, Breaux as an RFA, etc.

Saintsallday said:
Fairley and Snead will be a little pricier but those two should get locked up too.
Click to expand...

Snead is an ERFA, meaning he's going to cost pennies if the Saints don't extend him past next year. He'll basically cost half a million, give or take. Obviously I think he's earned a spot beyond that, and a salary beyond that, but leverage wise he doesn't have any. Not the way Fairley does at least.

sammymvpknight said:
Can you still carry over from one year to the next?
Click to expand...

Yes. It is part of the CBA and I have no doubt that it will be in the next one also. From what I can see both the Owners and NFLPA like the rule.

scott88 said:
i don't think the Saints should give Willie a pricey contract as they've shown that WRs are easily replaced in their system
Click to expand...

Have to reward your guys for producing though. Snead is a key piece on 3rd downs and goes unheralded in the run game. He deserves a Lance Moore-like deal Id give him 5 years 20 mil and leave it there. Or like an Ingram very reasonable 4 years 16mil. Snead has earned it IMO. Keep this WR corp till Brees retires and then reassess

Saintsallday said:
Have to reward your guys for producing though. Snead is a key piece on 3rd downs and goes unheralded in the run game. He deserves a Lance Moore-like deal Id give him 5 years 20 mil and leave it there. Or like an Ingram very reasonable 4 years 16mil. Snead has earned it IMO. Keep this WR corp till Brees retires and then reassess
Click to expand...

Yes he did. I agree.

Snead, Fairley and maybe Hightower. The rest can enjoy the FA market.