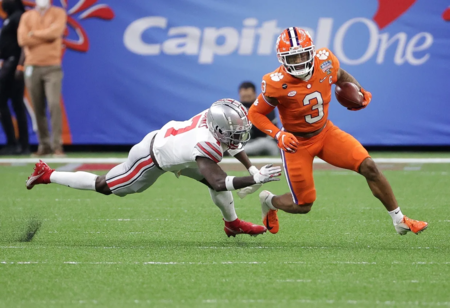 This wideout from a national powerhouse has slipped under the draft radar, but has the potential to make an immediate impact as a mid-round draft choice.

New Orleans Saints wide receiver Michael Thomas suffered an ankle injury in the 2020 season opener that would hamper the team's passing attack all season. Thomas, a four-time 1,000-yard receiver, three-time All-Pro, and holder of the NFL single-season reception record, played in only seven games and was not nearly at full strength all year.

Veteran wideout Emmanuel Sanders stepped into the team's top receiving role in his first season with the Saints, but he’s more suitable as a number two wideout. Sanders was released this offseason because of salary cap reasons.

Marquez Callaway and Deonte Harris have each shown great promise and will be counted on for bigger contributions going forward. The team also hopes to finally get consistent production from 2018 3rd round pick Tre'Quan Smith.

With the offseason retirement of legendary quarterback Drew Brees, the Saints will be starting a new signal-caller for the first time since 2005. They could look to provide their new quarterback with additional weapons through the draft, even with a healthy Thomas back in the lineup.

New Orleans may use their early-round draft picks to shore up defensive needs. There are several wideouts that will be available through the second and third days who look like they could be immediate contributors in the league.

Today's draft spotlight focuses on a player from a national powerhouse that has slipped under the draft radar.