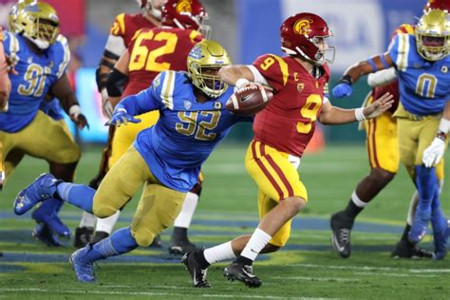 This versatile PAC-12 defender has both the versatility and explosiveness to be a Day 2 draft steal.

The New Orleans Saints have had one of the NFL's deepest defensive lines over the past two seasons. Much of the attention has gone to their talented defensive ends. Perennial Pro Bowler Cameron Jordan, former 1st round pick Marcus Davenport, breakout star Trey Hendrickson, and emerging star Carl Granderson have been a nightmare for opposing quarterbacks.

It is the team’s deep and disruptive corps of defensive tackles that have been an underrated part of the Saints' defensive success. They’ve created consistent interior pressure, forces opponents to commit double-team blocking, and be a major reason for a top-five ranking against the run over the last three seasons.

Sheldon Rankins, the 12th overall selection in the 2016 draft, and star run defender Malcom Brown were both lost this offseason. Those losses have depleted their formidable depth. The team still has underrated star DT David Onyemata, along with promising former undrafted tackles Shy Tuttle and Malcolm Roach, but may want to add another playmaker up front with a draft choice.

Outside of Alabama's Christian Barmore, there are no sure 1st round picks at defensive tackle in this year's draft class. However, the position is deep in talent into the middle rounds. Today's draft profile highlights one such player.