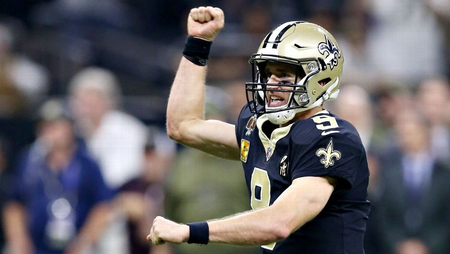 The New Orleans Saints finished the first half of the season with a 7-1 record. Here's a look at how they have fared and what's ahead:

First-half rewind: Is there a more battle-tested team in the NFL? New Orleans has won seven straight, including a brutal stretch over the past three weeks (at Baltimore, at Minnesota, vs. the previously undefeated Los Angeles Rams). They have proven they can win in a variety of ways, whether Drew Brees, 39, is still out there acting like Superman or whether they have to patiently survive a slugfest. Alvin Kamara and Michael Thomas have been two of the NFL's best playmakers, and the offensive line is among the game's best. The pass defense remains a concern, but the Saints have shown gradual improvement in that department -- and they even stepped up with three game-changing takeaways to fuel the wins against the Vikings and Rams. Grade: Near-perfection

What's the biggest factor in the Saints making a deep playoff run? The secondary has to hold up. Although they've improved a bit in recent weeks and made a midseason trade for cornerback Eli Apple, the Saints still rank among the NFL's bottom four pass defenses in several categories -- including big plays allowed. No. 1 cornerback Marshon Lattimore is an asset, but quarterbacks have had too much success throwing away from him and picking on the No. 2 and 3 corners -- especially since veteran Patrick Robinson went on injured reserve in late September. ...