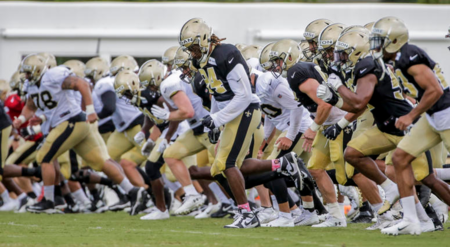 The Saints made some roster moves on the 5th day of training camp. Former LSU Tiger Travin Dural is back. The wide receiver spent the last 2 years in New Orleans on the practice squad. Another product from a local school joined the Black & Gold as former Tulane running back Rob Kelly was signed. Meanwhile, running back Buck Allen was placed on injured reserve, while defensive back Chris Campbell was waived/injured.

Not present for Tuesday’s session were WR Michael Thomas, S Marcus Williams, LB Vince Biegel, RB Latavius Murray, WR/RS Deonte Harris and OL Derrick Kelly II. We also saw much talked about WR Emmanuel Butler leave the practice field early. He appeared to suffer a lower leg injury, but walked off with trainers to the locker room. The Saints have Wednesday off and will be back on the practice field Thursday morning. Preseason game #1 is next Friday in the Superdome vs. the Vikings.

Drew Brees and the rest of the Saints QBs were feeling the pressure today. The defensive line was winning in the trenches making life difficult for whoever was under center. It isn’t often we see Brees frustrated, but he had a rough day since there were times he wasn’t able to step up in the pocket. Free agent acquisition Malcom Brown has looked like a solid signing as he has showcased his power and burst up the middle. ...