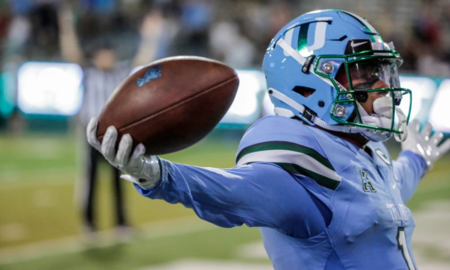 The New Orleans Saints added a new face to their roster on Thursday: wide receiver Jalen McCleskey, as announced by his representatives at National Sports Agency. The terms of McCleskey’s agreement with New Orleans were not immediately available.

McCleskey’s arrival follows a workout at Tulane’s recent NFL pro day, which was hosted at the Saints’ facility; the COVID-19 pandemic cut the 2020 pro day circuit short, so this was an opportunity for him to show scouts and coaches what he can do. He wasn’t picked during the last NFL draft, though he did join the Falcons for training camp.

He profiles as more of a slot receiver at 5-foot-11 and 165 pounds, and said last year that he models his game off of pros like Cole Beasley and Julian Edelman. But his 4.28-second time in the 40 yard dash suggests he has better wheels than either of them ...