Online
Before you talk about being disrespected look at the Pittsburg/Denver spread.

Denver is 5-2 and they are playing the Steelers who are 2-5 and coming off a loss against the Raiders. Denver is a 2.5 point dog.

Offline
I think this team stunk it up and the sooner ppl understand that the better off this board will be. Respect comes when you are consistent and when this team has gone down the season playing similar to what they had prior to the Ravens, then and only then will the be RESPECTED!

Everyone is still waiting for the old Saints to show up.

Offline
Take the Saints with no doubts....I don't see the Saints self imploding two games in a row.

Offline
I don't see it as being disrespected at all. The team came out flat against a good Baltimore team, and they paid the price for it. Now, the have to go on the road, to a division opponent who played them very tough just a few short weeks ago. Yes, Tampa is coming off an ugly loss to the Giants, but they're still the home team here. And, they beat Philly (albeit on a 62-yard FG) in their last home game. I wish people would get off of this "We don't get any respect!" kick. I've said it before, and I'll say it again. Who cares? I only care about wins and losses. That's the only thing that should matter.

Can't believe Denver is 2.5 point dog. They lose on a FG to the Colts, while the Steelers are coming off a loss to the Raiders. Now there's a lack of respect.

Offline
I wouldn't bet on this game nor the Denver Pitt game. I think the Saints should win, but Tampa goes down 5 games after 8 if we beat them. They will be in desperation mode (I've been saying this since Sunday /obligatory).

Offline
Home team gets 3 pts automatically. That means we are 4pts favorite straight up.

Offline
This is one of those games where we need to just dominate, and never give the Bucs any hope. Smother them, score often, and hold the ball for a long, long, time on offense. Take the home crowd out of the game, and make 'em quit by halftime.
I hope the coaching staff creates a dynamic gameplan against the Bucs, on both sides of the ball.

Offline
We DON'T get any respect, but I don't care about that either. I'm surprised they gave us a point. Can't really say that the Raven game impressed doubters. Should we be respected after that game? I loved the no die attitude, but did outsiders recognize that? Did outsiders even SEE the game or did they just see the final score and some choice stats? Everyone just hang in there for the long haul cause I don't see any major decline except for some of the D. They really have declined recently especially against the Ravens. So many wide open 15 - 20 yd WR's on 3rd down. THAT does NOT get your D off the field with time to rest. The penalties are starting to pile up too.

Offline
Duece ALL day long is the perfect remedy.

Offline
I still don't like this game. We had trouble with Tampa at home, and despite their record, are a tough team to play on their own field.

We need to be at the top of our game here. 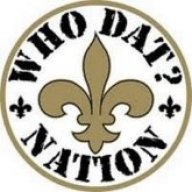 Offline
The slim spread is just a reflection of how poor we played Sunday. You can bet TB will be playing to win and they will be hungry. They don't want to drop another game, especially to a division foe. It will be a tough game. The kind of game we struggle in. If Deuce is slowed by the knee, it'll make for a long day offensively. If we drop this game this week, then I'll start to worry.
OP
OP

geauxboy said:
Duece ALL day long is the perfect remedy.
Click to expand...

tristang said:
I still don't like this game. We had trouble with Tampa at home,
Click to expand...

I think the Saints were really taken by surprise, in the 1st game vs. Tampa, by how well Gradkowski played. We really didn't know what to expect from him, having it be his first start. He played very well, and they allowed him to throw the ball more than expected... That's why they were able to hit so many big plays on us.

We were clearly the better team. I just think they surprised us. If they were going to beat us this year, that was their chance. This time around we know better.

Offline
We didn't have any film on Gadkowski the first time we played him so he was kind of the unknown factor in that game. I've read that his production has been steadily dropping with each game since we played them so I can only conclude that that is because teams are seeing more and more of him on film.

Offline
Only +1 pt. favorites and away? Huh, the underdog usually comes through for me with those odds. Betting on Tampa.
Show hidden low quality content