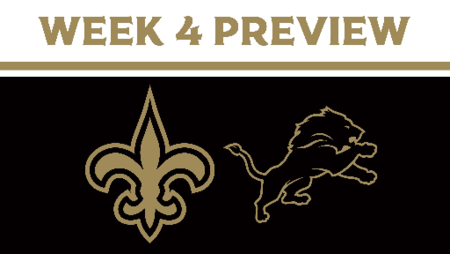 The New Orleans Saints (1-2) will look to bounce back after consecutive defeats this week when they travel to Ford Field for the first time since 2014 to face the Detroit Lions (1-2).

The Saints lost to the Green Bay Packers 37-30 on Sunday night. After defeating Tampa Bay in the season opener, New Orleans has dropped two straight close games and will set to reverse that trend this week.

New Orleans' Sunday night loss to the Packers featured seven lead changes. With the score tied at 27 at the start of the fourth quarter, the Saints had regained the ball near midfield on a big fourth and one-stop for no gain by S Malcolm Jenkins and CB Marshon Lattimore. However a fumble by QB Taysom Hill was forced and recovered by Green Bay LB Za'Darius Smith at the Packers' 43-yard line with K Mason Crosby eventually kicking a 49-yard field goal and the Saints behind for the remainder of the contest.