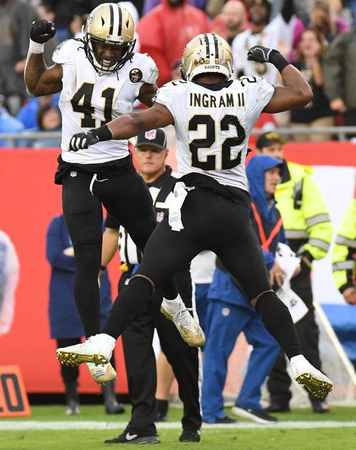 A quick glance at items of interest as Week 16 kicks off:

Who’s hot: Alvin Kamara and Mark Ingram. It seems a bit surreal that Drew Brees hasn’t had a 300-yard game in more than a month, but the Saints (12-2) will still carry the NFL’s best record into Sunday’s showdown against the Steelers and can clinch the No. 1 seed for the NFC playoffs with a victory. But not living and dying with big games from Brees is part of the Saints’ mojo now, thanks to the NFL’s best running back combination.

Last season, Kamara and Ingram became the first pair of backs to both collect 1,500 yards from scrimmage. That milestone won’t be matched this season, given Ingram’s four-game suspension at the start of the season. But their impact is measured in other ways, like a combined 119.6 rushing yards per game, best of any NFL backfield tandem. Or with touchdowns. Kamara, with 16 TDs (12 rushing, 4 receiving), is money when in striking range. Ingram, with 5 rushing TDs, can set the franchise record now shared with Deuce McAllister (49) with his next score. Or with Kamara’s 77 receptions for 627 yards, essential to an offense lacking a consistent wide receiver threat beyond star wideout Michael Thomas (109 catches). Pittsburgh has had some issues this season in containing receiving threats out of the backfield, so it sets up an intriguing swing factor to watch.

Brees, the walking NFL record book and MVP candidate, is still plenty capable of a monster game – especially at home, where the Saints have averaged 38 points per game this season. But balance and versatility are the tickets to establishing rhythm, with Kamara and Ingram providing so much of the substance to sustain the drives that tend to open up the deep shots or close out victories. ...