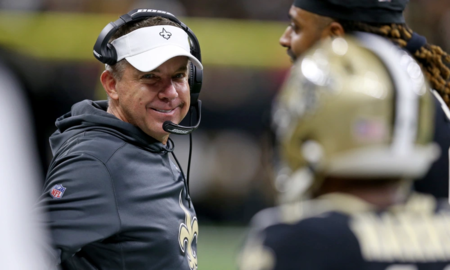 What are the New Orleans Saints going to do in the 2020 NFL Draft? While it’s too early to say which positions (much less specific prospects) they’ll be targeting, Saints coach Sean Payton offered his take on the areas he’s been most impressed with so far during an interview with NewOrleansSaints.com’s John DeShazier.

“After doing the front-board meeting, certainly it’s a deep draft at receiver,” Payton said, referring to a conference with college scouting director Jeff Ireland and his staff. “We think [it’s also deep] at defensive back as well, and defensive line. Anytime I say that, there’s certainly a lot of talent at the other positions. But if you said what stood out in our meetings in the last month, it would have been those positions.”

While receiver is easily New Orleans’ biggest roster need — Michael Thomas, the reigning Offensive Player of the Year, was targeted 129 more times than the next-best wideout — Saints general manager Mickey Loomis was quick to emphasize that the team isn’t zeroing in on the options at the top of the draft. ...