Saints bring up several players from their practice squad vs. Falcons (1 Viewer) 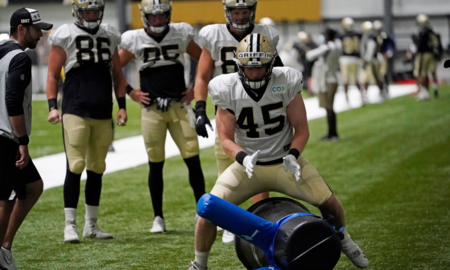 The New Orleans Saints completed a series of roster moves before their Week 11 kickoff with the Atlanta Falcons, including two call-ups from their practice squad after still-developing injury situations gained clarity. Here’s what you need to know about this week’s new additions:

Griffin was already called up for two game-week spots earlier this season (against the Detroit Lions and Los Angeles Chargers), so signing him to the active roster was the only way the Saints could get him into this game. Originally signed back in 2016 out of the Air Force Academy, Griffin has primarily been used as a blocker by the Saints this season — per Pro Football Focus, 31 of his 40 snaps on offense have come as a run blocker, with 5 snaps in pass protection and 4 routes run downfield.

His arrival follows the loss of co-starter Josh Hill, who exited last week’s game with a concussion and was unable to return to practice. Saints coach Sean Payton has talked before about how important Hill is to the offense as a blocker, and he’s quietly one of the longest-tenured members of the team (he has 112 game appearances for the Saints, trailing only Drew Brees, Thomas Morstead, and Cameron Jordan among active players). Griffin can help mitigate his loss on running downs, but expect more passing opportunities for rookie draft pick Adam Trautman and run-after-catch looks to co-starter Jared Cook. ...