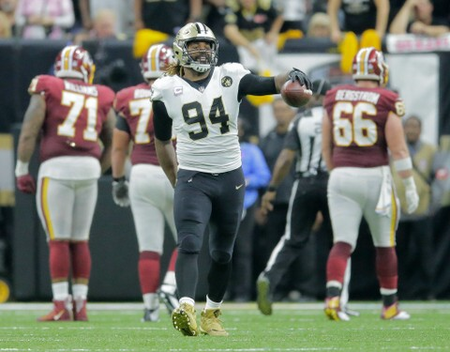 Cameron Jordan has five sacks in five games this season, and yet the New Orleans Saints' All-Pro defensive end has reason to be bothered by his production, he said Wednesday (Oct. 10) while on the Jim Rome Show.

According to Jordan, he could have another three sacks over the last three weeks against the Atlanta Falcons, New York Giants and Washington Redskins. He said he missed a chance to sack the Falcons' Matt Ryan "late in the game" in addition to what he felt were missed sack chances against Eli Manning and Alex Smith over the last two weeks.

"I'm really irritated at myself," said Jordan, who has 64-1/2 career sacks in eight seasons with the Saints. "Which is only going to motivate me to keep getting better for next week."

Jordan also talked about Drew Brees and the quarterback becoming the career leader in passing yards Monday in the win against Washington. ...