Saints can score, but their defense has been surprisingly stout (1 Viewer) 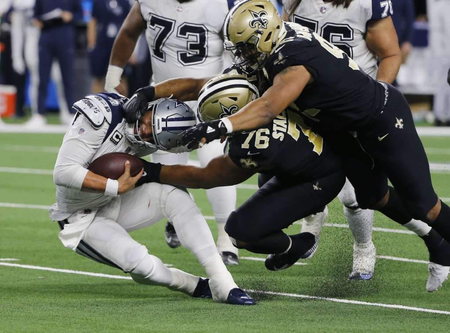 Bucs coach Dirk Koetter noted that New Orleans owns the top rush defense in the league. The Bucs' 112 rushing yards in Week 1 are the most the Saints have allowed all season.

TAMPA — The strength of the Saints' offense is well known — its 34.9 points per game are tied for second most in the NFL — but going into the division rematch with the Bucs, New Orleans' defense has been surprisingly stout.

The Bucs handed the Saints a 48-40 loss in Week 1. New Orleans then won 10 straight before losing to Dallas last week, and while its reputation is still one of a dangerous offense anchored by quarterback Drew Brees, Bucs coach Dirk Koetter said he's been impressed with the the Saints on the defensive side of the ball.

"I haven't been following them that much, I guess; I probably wouldn't have guessed that," he said. "You don't win 10 straight in this league if you're not pretty good."

And while the Bucs' defensive resurgence has been anchored by a defensive line that has produced 15 sacks over the past four games, tied for second most in the league, Koetter noted that the only team that has more in that span is New Orleans with 20. ...