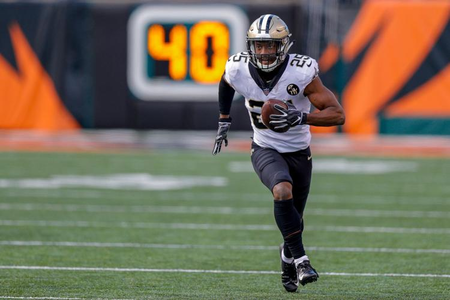 Each week gets a little bit better for Eli Apple.

Now that he’s been with the Saints for three games, things are getting a little bit easier and more comfortable for him, and each game has felt better than the last. But the cornerback, who was acquired by New Orleans in a trade with the New York Giants ahead of the deadline, is still trying to figure some things out.

“It’s tough to say not going through a training camp with the defense and not hearing everything as far terminology goes,” Apple said. “But that’s why it’s great to have great guys in the locker room who can help you any way they can. It’s just up to me to continue to ask questions and hound them as much as possible about signals and different little things they like to say to get everyone on the same page.”

Apple intercepted a pass last week against the Bengals, his first since 2016, which should boost his confidence. But he also surrendered a touchdown on the opening drive when he missed a jam, a result of what Apple called having “bad eyes.” But as he has settled in more, it has opened up some of the things the team has been able to do.

The Bengals game saw New Orleans play a more aggressive brand of football, with stronger coverage and game plan full of blitzes. To some degree that a testament to how Apple is settling into the defense, even if there is still work to do. ...