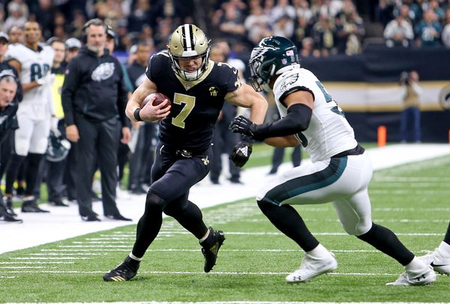 Of all the impressive plays Taysom Hill has created in his do-it-all role this season, the backup quarterback has yet to make a big impact as a receiver for the New Orleans Saints.

In the regular season, Hill had seven targets with three receptions that went for 5 yards, 3 yards and minus-4 yards. Hill had another target in last Sunday’s divisional round win over the Eagles, but Drew Brees underthrew him, allowing safety Avonte Maddox to break up what should’ve been a 46-yard touchdown.

With Hill playing various roles on offense, he could be the target on a pass at any time, and even though he spent most of his football life throwing the ball, the Saints are confident in his ability to catch, too, as coach Sean Payton said Hill’s hands are “outstanding.”

“They’ve never really been tested, but I think they’re good,” Hill said of his hands. ...