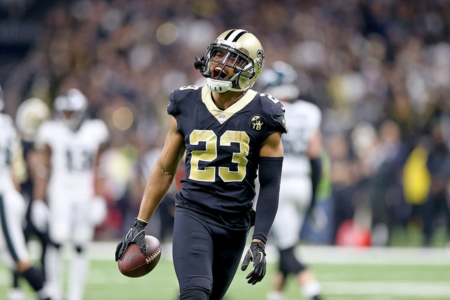 De photo? DeMocker did it!

The cornerback position was expected to be a strength for the New Orleans Saints in 2018, but the cover men were too often a liability for the NFL’s 29th-ranked pass defense.

The Saints cornerbacks had a nightmarish start to the 2018 season. In Week 1, the Buccaneers torched Lattimore and Crawley on the outside, and then in Week 3, Patrick Robinson, the team’s top slot defender, suffered a season-ending ankle injury.

The Saints were fortunate to acquire Apple via trade early in the season to replace the struggling Crawley, and Williams played admirably when he filled in for Patrick Robinson. Couple that with Lattimore continuing to be one of the NFL’s top cornerbacks, and the group did enough to help the Saints during an impressive season that resulted in the NFC’s No. 1 seed. ...

Yesterday at 9:42 PM
Dan in Lafayette

Yesterday at 9:14 PM
Dan in Lafayette

Yesterday at 9:03 PM
Dan in Lafayette

Wednesday at 7:28 PM
Dan in Lafayette