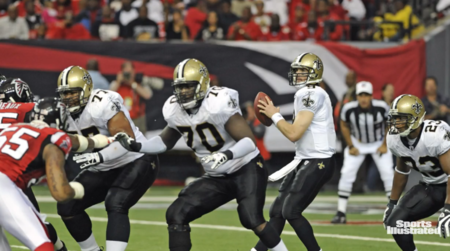 The New Orleans Saints are 70 days away from their Week 1 clash with the Tampa Bay Buccaneers. Here is a look at the greatest player in Saints history to wear #70: OT Jammal Brown

Jammal Brown, 39, spent seven seasons in the NFL, five with the New Orleans Saints. After arriving at Oklahoma as an All-state awarded DT, Brown solidified himself as one of the best OL in the country, winning the Outland Award (best interior lineman) in 2004. A unanimous All-American in 2004, Brown entered the 2005 NFL Draft regarded as the best OT in his class.

The New Orleans Saints selected Brown 13th overall in the 2005 NFL Draft. Brown started 13 games as a rookie playing at RT and made the NFL’s All-Rookie Team. In 2006, under new HC Sean Payton, Brown moved from RT to LT. Tasked with protecting the Saints' new $60M man, QB Drew Brees, Brown produced his best NFL season. Brown anchored a strong OL that led the Saints to their first-ever NFC Championship appearance in 2006. Starting in 15 games, Brown earned his first trip to the Pro-Bowl following the Saints 10-6 season. ...