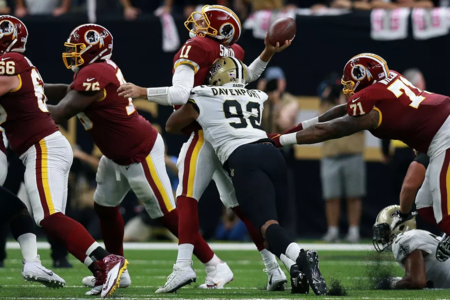 In 2017, the New Orleans Saints came extremely close to taking a trip to the NFC title game, losing to the Minnesota Vikings on a last-second miracle pass from Case Keenum to Stefon Diggs. A few months later, the Saints traded two first-round picks to move up and select University of Texas-San Antonio pass rusher Marcus Davenport with the No. 14 overall pick, hoping that his dynamism on the edge would help push the team over the top.

Davenport struggled a bit with injuries during what was still a solid rookie season, but played only 51 snaps in New Orleans' two playoff games, the second of which was another heartbreaking loss, this time to the Los Angeles Rams. Davenport came back healthy for his second season and took a nice step forward, starting all 13 games in which he appeared and picking up six sacks, five tackles for loss, three forced fumbles, and 16 quarterback hits. He got injured again down the stretch, though, and didn't appear in New Orleans' playoff loss to (again) the Vikings. ...