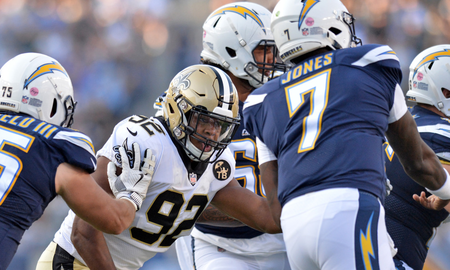 The Pro Football Writers of America recognized New Orleans Saints defensive end Marcus Davenport by selecting him for a spot on their 2018 All-Rookie team. Davenport was the 14th overall pick in the 2018 NFL Draft, and the Saints traded up to pick him.

He only appeared in 13 games due to injury, but Davenport ranked among the rookie leaders in sacks (4.5) and quarterback hits (12). Those numbers also put him among some of the most-productive Saints rookie seasons in team history. His spot on the All-Rookie team was well-deserved.

Davenport joins three other rookies among the honorees at defensive line: Bradley Chubb of the Denver Broncos, Da’Shawn Hand of he Detroit Lions, and Daron Payne of Washington. Chubb and Davenport are the only true defensive ends of the group. Indianapolis Colts linebacker Darius Leonard was chosen for 2018 Defensive Rookie of the Year. ...