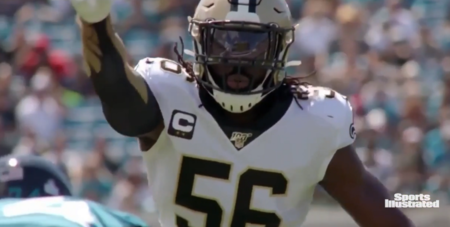 A surging New Orleans Saints defense will try to keep their momentum rolling in Week 2 when they travel west to take on the Las Vegas Raiders on Monday Night Football. New Orleans held a Tampa Bay offense loaded with weapons to just 310 total yards and forced 2 turnovers, returning one interception for a touchdown. The Saints finished 11th in the league in total defense a year ago, 10th in turnovers forced (23), and held seven opponents to less than 20 points.

They’ll take on a Jon Gruden Raiders squad that has a few dangerous playmakers. Las Vegas finished 11th in the league in total offense last season but averaged just 19.6 points per game, eighth-worst in the NFL. They scored 34 points on the road in a Week One victory over Carolina, putting up 372 yards of offense and not turning the ball over.

A New Orleans pass defense that ranked 20th in 2019 predicates its success on pressuring the quarterback. The Saints took down opposing passers 51 times last season and sacked Tampa Bay QB Tom Brady three times in Week 1, hitting him several other times and forcing an intentional grounding. Defensive end Cameron Jordan leads the assault upfront. The 31-Year-old Pro Bowler has had double-digit sack totals in four of the last five seasons, including a career-high 15.5 last season. ...