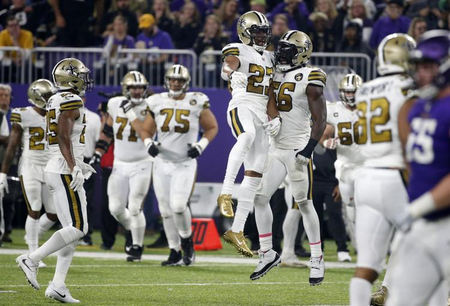 MINNEAPOLIS — This time, there was no last-second miracle to save the Vikings.

The defense wasn't about to let this one slip away, despite a first half when it looked like the Saints' defense wouldn't give them a chance.

This time, the defense made the play. Or actually two.

Linebacker Alex Anzalone shifted the momentum in the second quarter by forcing a fumble that led to a score, and P.J. Williams returned an interception for a touchdown in the third quarter to springboard the Saints to a redemptive 30-20 victory over the Minnesota Vikings.

It was the sixth straight victory for the Saints (6-1), the second-longest winning streak in the league.

The longest streak belongs to the undefeated Los Angeles Rams (8-0), who visit the Mercedes-Benz Superdome next Sunday.

To set up that NFC showdown, the Saints had to first get past the nemesis Vikings, who beat them both the regular-season opener last year and then broke their hearts in the playoffs in January with the play dubbed the Minnesota Miracle. ...