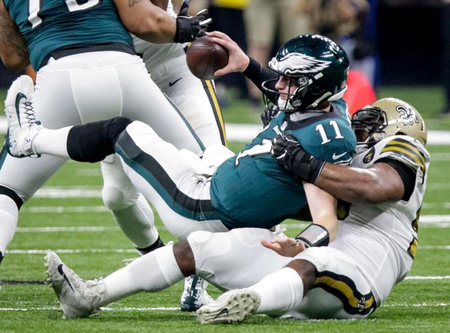 The Saints allowed the Philadelphia Eagles to wear their home uniforms to the Mercedes-Benz Superdome on Sunday, but that was only so the Saints could evict them from the Superdome following a 48-7 defeat that saw the defense surrender 196 yards.

Not only that, the Saints intercepted three passes, had three sacks, seven tackles for a loss, five quarterback hits and eight passes defensed. It was a total takedown of the reigning Super Bowl champions — and yet the defensive line expects to see reel after reel of areas they can improve when they review the game this week.

“He is a stickler for fundamentals, technique and tries to be as perfect as possible,” Rankins said of Nielsen. “It doesn’t matter if we’re up by 60 or it’s a close game. He is who he is, and he coaches the way he coaches. We appreciate it. His mindset trickles down to us, and we’re never letting off the gas.”...

Saints Use Stifling Defense in 13-10 Win Over the Seahawks

Next Woman Up: Gayle Benson, Owner and Chairman of the New Orleans Saints