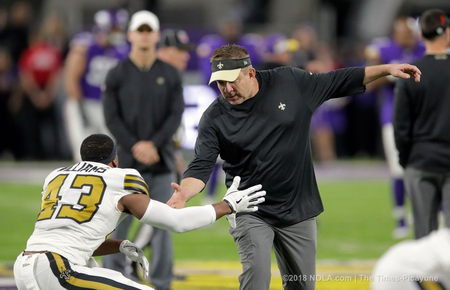 MINNEAPOLIS — Of course, in the minutes before the New Orleans Saints and Minnesota Vikings took the field at U.S. Bank Stadium for a highly-anticipated prime-time matchup between NFC heavyweights, that play had to be relived.

The big screens came to life. Dramatic music cued up and a lengthy video tribute to the Minnesota Miracle played, bringing back to life both the play that ended the Saints’ 2017 season and the outsized reactions of the home team’s fans in the moment.

Then the lights came on and the Saints officially made that game history.

New Orleans survived an early onslaught from an improved Minnesota passing game and responded with a fury the Vikings were not ready for. After falling behind 13-7, the Saints responded with 23 unanswered points, eventually rolling to a 30-20 win.

The Saints return to New Orleans 6-1, set for a date with the undefeated Los Angeles Rams. ...
Full Story - NOLA.com