Saints defense optimistic it can hold up without Rankins (1 Viewer) 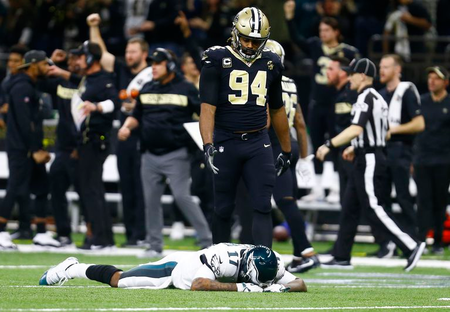 He is among a trio of defensive linemen likely headed for more snaps against one of the best offenses in the NFL with a trip to the Super Bowl on the line.

Sheldon Rankins, the Saints’ most productive interior defensive lineman, won’t play in the NFC title game against the Los Angeles Rams — or any other game this season — after tearing his Achilles in the first quarter of Sunday’s playoff victory over Philadelphia .

At the same time, the Saints sounded encouraged that the rotation of Onyemata, Tyeler Davison and rookie Taylor Stallworth did enough to help shut out the Eagles for three quarters.

“They played great,” Saints linebacker A.J. Klein said after studying game video on Monday. “Our D-line group is very deep. We have the guys in that room to pick up the slack.”

Yet Klein acknowledged there’s quite a bit of slack to pick up. ...