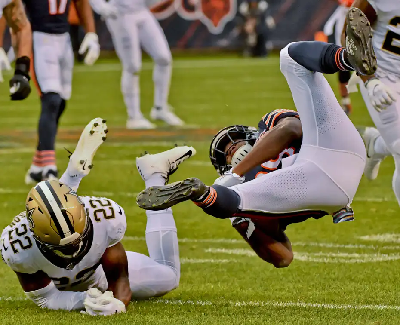 The 4-2 New Orleans Saints trek north to the Windy City this Sunday to take on the 5-2 Chicago Bears. New Orleans is coming off a 27-24 home win over the Carolina Panthers, their third consecutive victory, while the Bears are looking to rebound from a 24-10 loss on the road to the Los Angeles Rams.

The Saints own the league's 7th ranked defense in total yardage, allowing 328 yards per game, but the 29 points per game against them ranks 24th. More concerning is the defense's inability to get stops on 3rd down or keep opponents out of the end zone in the red zone.

New Orleans is 29th in 3rd down defense, letting opposing offenses convert over 50% of their opportunities. They're worst in the league when an opposing offense gets inside their 20-yard line - allowing a touchdown on over 86% of the time.

The Saints have created only one turnover in the past four contests after gathering three takeaways in the season opener.