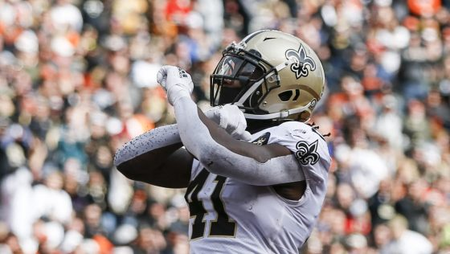 The only bad news for the Saints Sunday came in the form of a key injury.

Left tackle Terron Armstead left in the first half with a shoulder injury, and did not return. He was replaced by veteran Jermon Bushrod, but it didn’t really impact them in the short term, as they rolled the Bengals 51-14.

Armstead’s status will obviously be a major concern for the Saints offense as the competition improves (the Bengals did nothing to take away from thier status as the league’s worst defense).

Despite that, they easily rolled to their eighth straight win to improve to 8-1, making you wonder most how in the name of Fitzmagic they lost to the Buccaneers in the opener.

Drew Brees was 22-of-25 for 265 yards and three touchdowns (i.e. as many touchdowns as incompletions), and the Saints scored on their first nine possessions (including touchdowns on their first five in the first half). Backup quarterback Teddy Bridgewater kneeled out the clock to keep it from being a perfect game in that regard. ...