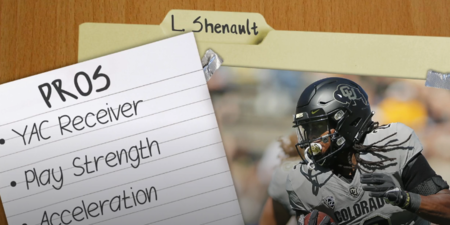 New Orleans Saints WR Michael Thomas had a season for the ages in 2019, catching an NFL-record 149 passes for a league high 1,725 yards and 9 touchdowns. Thomas has increased his production in each of his four professional seasons, setting league records with 470 receptions for 5,512 yards and 32 touchdowns. For as great as Thomas has been, the Saints have gotten little production from their other wide receivers.

WR Ted Ginn Jr. had the next most receptions among the team’s wideouts in 2019 with just 30, and in 2018 WR Tre'Quan Smith caught 28 passes to finish second at the position behind the 125 balls that Thomas hauled in. With the addition of Emmanuel Sanders in free agency, the Saints have shored up what has been a glaring weakness over the last two years. Sanders is 33-Yrs old however, and the NFL draft looks loaded with wide receiver talent. The Saints may take advantage of that pool of talent, perhaps even with their first-round pick, 24th overall.

Today’s draft profile looks at a versatile wideout talent that should still be available late in the 1st round. ...