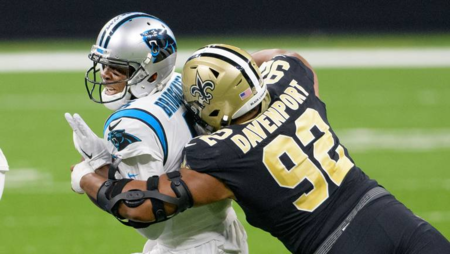 Drew Brees and the New Orleans Saints got off to a great start by striking first on the opening drive, which ate up nearly eight and a half minutes off the clock. Brees was a perfect 6/6 on the drive with four of those completions coming out of the backfield to running back Alvin Kamara. The drive ended with a beautiful catch by tight end Jared Cook in the back corner of the end zone that was tightly contested by safety Tre Boston.

Carolina responded with a score of their own on their first drive of the day but as the theme has been all season long, a nice drive that stalled out, resulting in a Joey Slye 43-yard field goal. However, the field goal try would not have been possible if Teddy Bridgewater hadn't escaped from pressure, rolling to his left and delivered a strike to a diving Curtis Samuel earlier in the drive. Bridgewater took a healthy hit on the throw but put the ball right on the money.

The Saints continued their offensive prowess on the next drive as running back Latavius Murray ripped off a 25-yard run up the middle to get the offense in motion and Brees sliced and diced the Panthers' secondary up the field before calling his own number on a QB sneak to punch in a one yard touchdown. ...