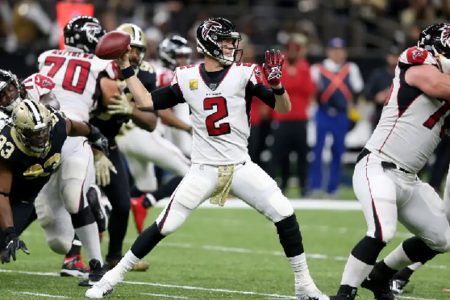 The New Orleans Saints and Atlanta Falcons renew one of the NFL's most underrated but perhaps most bitter rivalry in Week 11 of the season. In a quick turnaround, renew hostilities against each other in Week 13. They will fight their Week Eleven clash in the Superdome, with the Saints traveling to Atlanta two weeks later in their second of three straight road games.

New Orleans and Atlanta have met 102 times throughout each franchise's history, including one postseason clash. The Falcons hold a 53-49 edge in the rivalry, including a 27-20 victory in the playoff game between the two on a 12/28/91 Wild Card meeting in New Orleans. The Falcons also hold a 26-25 edge in this series when the game is played in New Orleans, site of the Week 11 showdown, and a 27-24 advantage when they host the Saints in Atlanta. New Orleans was upset at home by their hated rival 26-9 on November 10th last season. The Saints exacted a measure of revenge just eighteen days later when they defeated the Falcons on the road 26-18 on Thanksgiving night, the second straight year they beat their rival on Thanksgiving.