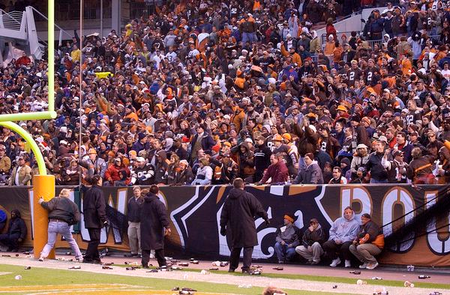 Security personnel move in front of the Dawg Pound fan section at Cleveland Browns Stadium in Clevelnd, Ohio, as fans begin to throw beer bottles and debris. Officials called the game, but later brought both teams back to play the remaining 48 seconds. (DAVID MAXWELL)

The New Orleans Saints fans who want NFL Commissioner Roger Goodell to consider a replaying of the NFC Championship think they have an example where the league commissioner overturned an on-field decision made by a referee.

In 2001, then-league commissioner Paul Tagliabue ordered the Cleveland Browns and Jacksonville Jaguars back to the field to play the final 48 seconds of a game the Jaguars won 15-10. In this case, the referee overturned a fourth-and-2 conversion by the Browns after a video review, a decision that caused Cleveland fans to throw bottles and other items onto the field.

Because of safety concerns, referee Terry McAulay decided to conclude the game at that point but was overruled 30 minutes later when Tagliabue ordered both teams back to the field. The game ended with two kneel-downs by then-Jaguars quarterback Mark Brunell. ...