Saints fans can be in that number of 3,000 for Carolina game in the Superdome Sunday (1 Viewer) 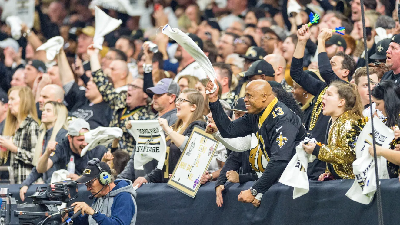 It will not be close to full, but there will be 3,000 New Orleans Saints fans allowed into the Mercedes-Benz Superdome on Sunday when the Saints host Carolina in a noon game on FOX.

New Orleans Mayor LaToya Cantrell decided on Tuesday to allow a minimal amount of fans in the 73,000-seat stadium, according to a statement from the New Orleans Saints. Only about 700 family members, friends, and staff members were allowed in the team's first three home games this season because of COVID-19 concerns.

The number of fans could grow to 6,000 for the Saints' home game against San Francisco on Nov. 15 and for Atlanta on Nov. 22 should there be no changes in the COVID-19 health and safety guidelines. By the Dec. 20th game against Super Bowl champion Kansas City and the Christmas Day game against Minnesota, a limit of 15,000 fans will be allowed, should the guidelines remain the same.

"I am allowing the Saints to move forward with this pilot exercise, allowing for limited seating in the dome this Sunday as part of a phased, incremental approach," Cantrell said on Twitter Tuesday afternoon.